Once upon a time there were two bookworms who wanted to read Classics.  But they were afraid, a little intimidated and needed encouragement.  So they joined forces and formed the Dust off your Classics challenge to support each other.  Dee from Dee Read’s and myself read our way through some good classics, some great classics and found so much in these books that is surprisingly still relevant.  So much so that I want to continue reading them and will continue to share my thoughts here on any I get through. 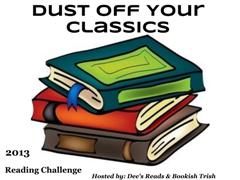 This time around I’m dusting off one of my beloved Agatha Christie novels and giving you five reasons why you might considering dusting it off too.

"The murderer is with us - on the train now..."Just after midnight, the famous Orient Express is stopped in its tracks by a snowdrift. By morning, the millionaire Samuel Ratchett lies dead in his compartment, stabbed a dozen times, his door locked from the inside. One of his fellow passengers must be the murderer.Isolated by the storm and with a killer in their midst, detective Hercule Poirot must find the killer amongst a dozen of the dead man's enemies, before the murderer decides to strike again...

Five Classic Reasons to dust off and read Murder on the Orient Express :

The old fashioned opulent setting of the Orient Express. The descriptions don’t sound very luxurious by today’s standards but it still screams romance and elegance and travel and adventure. A trip is well outside my budget but at least I can journey via this book.

Poirot! Need I say more! I really enjoy this witty, vain moustached detective whose brain runs rings around mine! I empathise with all the other characters as I can never keep up with him either.

The eclectic mix of characters.   There is such a variety of passengers on board and establishing who they all are and why they are onboard is a huge part of the plot.

“All around us are people, of all classes, of all nationalities, of all ages.”

There is a map of where all the cabins are situated and who slept in each. I love quirky extras like this and I poured over it trying to solve the mystery. Unsuccessfully!

The plot. The reason I love all Dame Christies books, they are skilfully plotted with mysterious but not obvious foreshadowing and zillions of red herrings. My status at 76%:

I have yet to solve one but I’ll keep trying!

Who should read Murder on the Orient Express by Agatha Christie?

Simple maths! If 3 or more of my reasons have caught your attention, then I think you need to make a date with this book, pronto 🙂

Dust off your Classics : And Then There Were None by Agatha Christie

31 Responses to “Dust off your Classics : Murder on the Orient Express by Agatha Christie”