Set against a backdrop of the post punk scene of the late Seventies, this book is an enjoyable read for anyone who likes 60’s and 70’s music.  It follows Bobby, an American who moves to Manchester with his band in a quest for stardom.  There he meets Kindle, a lonely soul who has no family and no friends.  They get married on a crazy whim, each expecting the other to call a halt but neither does and so they start their married life as strangers. 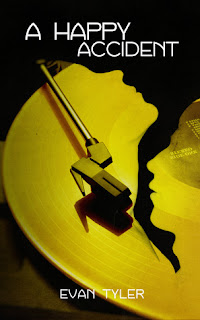 By the way, this book is based loosely on the life of Steven Tyler so that makes it even more intriguing.   And we have lots of music references and song lyrics scattered throughout to set the atmosphere of the time and place.
A Happy Accident is very character driven.  And both characters are well developed with good points and bad points.  Bobby is naive, sweet natured, loving and patient but he is also a procrastinator who ignores things he doesn’t want to do (like telling his parents he is married!).  There was one incident in the book where Kindle was subjected to racist comments and he did nothing to stand up for her, in that moment I hated him.  Kindle on the other hand is strong, independent, feisty, terrified of letting someone in to her life but at the same time dying to let Bobby in.  She has a mean tongue on her and lashes out in the harshest of ways when she feels afraid.   At times I loved the characters and at other times I lost respect for them.  But their flaws make them feel rounded and real.
It switches third person perspective between Bobby and Kindle a lot which gives a good insight to what both are thinking.  There is also a huge amount of dialogue which is a plus for me as I love well written dialogue but I know not everyone does so I thought it was worth mentioning.
The book starts with a captivating but upsetting prologue so you know that A Happy Accident is not going to have a happy ending.  This creates a mystery element as it feels impossible during the book for it all to end up the way it does.  I have to admit at times the story stalled a little for me but then would pick up pace again.  As I became invested in the story, the prologue worried me but in a good way, I wanted to read on to get all the pieces to make the jigsaw.
Warning, all cliff-hanger haters, you might want to wait until book 2 is out!  The ending is a tease and a hook as you get a glimpse of the future.  I immediately wanted to know more about their daughter Choice and what happened next.  The name Choice too is an interesting one as it defines her life even though the origin of her name is from Bobby’s family.  Eagerly looking forward to book 2 to get some more jigsaw pieces to help put this mystifying but appealing puzzle together.
Finally, I know I’ve mentioned this before but look at that cover.  I mean really look at it, feast your eyes on it.  It’s perfect.
Recommended to those who like quirky romances, music and a little bit of suspense all mixed in the pot together.  I also suggest sticking on a music channel like VH1 in the background to get your groove on while reading!
Thanks to the author for providing me with a free copy of this book in exchange for an honest, unbiased review.

Bookish Chat :  Are you as big a fan of music references and song lyrics as I am?  I love it as they add such flavour and atmosphere and drive the story forward in a quirky way.

Blog Tour : Pieces For You by Genna Rulon

10 Responses to “Book Review : A Happy Accident by Evan Tyler”