This is a semi regular feature that I do where I embarrass myself by sharing my bookworm nerdy memories.  Previously I shared with you my childhood experiences of reading in a tree.  Today’s blushes are brought to you by talking about reinventing scenes from books.
OK, relax there!  I’m not talking recreating scenarios like fifty shades; this isn’t that sort of blog!  No, I’m off to the opposite extreme altogether.  One of my favourite books as a child was the Secret Seven by Enid Blyton.  For those not familiar, this was a group of friends who held secret meetings and solved mysteries. 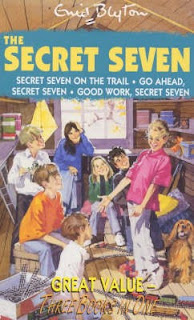 I loved it so much I formed my own secret club.  The Secret Stocking Club (I know I’m sounding a bit shady again now but this really was the name!).   All members had a small badge in the shape of a sock with their name written on it (so much for being a secret club!).  The badges were cut from cereal boxes and customised to your favourite colour.  We had a password, brought what ever food goodies we could grab from our kitchens and met in a top secret location (aka my garden shed!).  And once the food was scoffed, we looked rather unsuccessfully for mysteries.  It consisted of myself, my sister, some neighbours and our dog Lassie.
Unfortunately my two year old sister and four legged Lassie were no help at all looking for clues for potential mysteries.  The rest of us spent half the time arguing over what the password was and the rest of the time disputing who was the leader.  And unlike the Secret Seven nothing exciting ever seemed to happen in our neighbourhood so we disbanded as quickly as we formed!
And instead of mystery solving, I reverted back to reading about them.  Which in reality was probably a lot safer anyway!
Bookish Chat: So have you ever tried to recreate a scene?  If so what book and how did it work out?

Questions at the end of Blog Posts? Yay or Nay?
I do solemnly swear that I am up to no good
How to write a book review and a freebie Note To Book download