I reviewed Screwed by Laurie Pissner during the week (a ya book about a teenage pregnancy) and my biggest criticism with it was that it was unrealistic.  That got me thinking about the different standards I apply to books and movies and had me wondering if I expect more realistic storylines from books than I do from movies.

I’m pretty sure I do.  An average movie is just 90 minutes long and I spend at least double that and usually more with any book I read.  Also I rarely read them all in one go, I read over a few different sessions so that means I stay with the characters and story arc for longer and so spend longer examining it and reflecting on it.
So while I can watch a movie and maybe eyeroll and sigh a bit with a ludicrous plot, I’m less judgemental and more forgiving than when it happens in a book.  I expect more from a book and it has to do more to impress me than create oh-so-convenient characters and oh-so-convenient plotlines to conveniently move the story where they want it to go.   Also in a movie, I’m distracted by extras such as the soundtrack, the actors, the set, etc and I tend to focus on them just as much as the storyline.  The popcorn helps too! 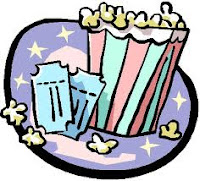 Whereas with the book, it’s just me, my imagination and the pages.   So when the storyline gets clichéd or the characters get too contrived then I’m switching off my attention and switching on my bad-book-radar.  If I pick up a book that looks like it’s dealing with issues then I expect it to deal with the issues in a realistic way otherwise why bother.   And even if it’s paranormal, I still expect things to be logical and to add up.

Also with a book, we usually hear the character’s thoughts in a way that doesn’t happen on screen.  So we have that extra insight into what’s happening and into what is motivating the character.    So I  think the author has to take an extra step to make everything believable or the story falls flat on its face for me.
No matter what genre, light and fluffy or scary and futuristic, I want characters that talk like real people do, I want them to make me forget they are characters in a book and just become real to me.  In a movie because you have to use your imagination less then this is less important to me.  Of course a bad film is a bad film and a bad book is a bad book but I think it’s easier for a film to pull you along if it’s mediocre.
Bookish Chat : What do you think?  Do you have similar thoughts or do you totally disagree?  As always, I love hearing your comments so don’t read and run, stay for a minute longer and share J