Screwed was a book that allured me in with the promise of dealing with hard issues but then failed to deliver.

Author : Laurie Pissner
My Rating : 2 out of 5 stars 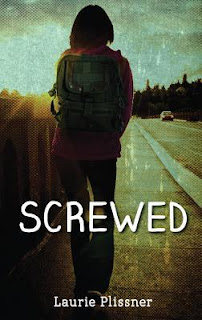 Meet Grace, the good-student, perfect-daughter who does everything her parents wanted her to do until the night she became pregnant. Her conservative, over zealous religious parents do a quick turnaround on their anti-abortion stance and demand she has an abortion. Grace stands firm and is determined to make her own choices for her baby.

Screwed caught my interest straight away, it was dealing with the reality of teenage pregnancy and that’s a subject I think should be covered in YA/NA books. It’s also a very emotional subject for me, one I was ready to get immersed in and I fully expected to love this book.

There were things I did like about this book, namely the letters that Grace wrote to her unborn baby, simple and very effective, these short letters captured a lot of feelings. I also loved when Grace planned out presents for her child, her choices were heartfelt, well intentioned and probably one of the few moments of joy she got to experience during her pregnancy.

Unfortunately the things I did like were far outweighed by the things I didn’t like. Firstly, the characters were one dimensional, they were either good or bad. No middle ground. No mixing up of good traits and bad traits. In real life people just aren’t like this and I don’t want people in books to be like this.

Secondly, the main reason I read this was to see an accurate portrayal of a teenage pregnancy with all the issues that brings with it. We didn’t get that here. Her parents threw her out but luckily in stepped in a fairy godmother with an attractive great nephew. This fairy godmother/kindly neighbour took Grace in, gave her a platinum visa card and paid for college. Great in a fairy tale but not so much in a book that I hoped was dealing with real issues in a realistic, meaningful way.

And of course the great nephew was on hand to provide a love interest, far too convenient and for me it didn’t work. The relationship between Grace and Charlie was built up slowly but I never got over how he just conveniently came in to her life. I had issues with a few other things in the plot too, they seemed to happen at the wrong time, for example a scene that took place a few hours after the birth. I don’t want to say any more for fear of spoilers but I thought this scene was ill timed and unlikely.

Overall this book was disappointingly predictable. I thought the plot had great promise but for me it never delivered.

Thanks for NetGalley and F+W/Adams Media for providing me with a free copy of this book in exchange for an honest, unbiased review.

Dust off your Classics : Murder on the Orient Express by Agatha Christie